Fiona’s books can be bought online from Gwales.com and Amazon.

Cinnamon Press books can be bought direct from the publisher.

Books can also be ordered from Palas Print, an independent bookshop in Caernarfon, North Wales, who also offer an online service.

If you would like a signed copy, please use the contact form at the bottom of this page – you can buy the books direct from me.

Many thanks! Diolch yn fawr!

The Green Gate sees Fiona Owen working at the peak of her talent. Deftly exploring landscapes, both interior and with a finely tuned sense of place, this is eloquent, lyrical and courageous poetry in which the threads of encounter continually weave.

There is a degree of openness in Owen’s poetry that constantly surprises and satisfies.

Experiences that might vanish are noted with lucid precision. The language is inventive and the images are not only original, but seem to be part of the order of things. Another remarkable collection from an accomplished poet – “Let us say it is a kind of jewel.” (‘Still Life’)

“The author welcomes us into a garden where, paradisal fashion, she delights also in naming blackbird, cat, jackdaw, bat and squirrel. ‘Not without love’ she watches the ‘Common brown rat … this distant cousin’; the starling with ‘its broken stick-for-a-leg’ lends a language for her own experience. In this kindred world ‘an owlcall is exactly / about you’, and the blackbird asks: ‘What’s inside? What’s inside?’ A great deal is inside, and this poet who (with Gorwel) is also a song writer, has an ear that’s tuned for it. ‘We have come to the place where everything is music’.

This crossing point between animal and human anima is far from comfortable however. Arthur Rimbaud said that poets are responsible for the animals, and this is where Fiona Owen takes her stand. In reworking Martial’s ancient Latin about the Colosseum she juxtaposes the dark blood stains on the ‘Gate of Death’ (through which animal carcasses were dragged) with the green gateway of her title; and she names modern instances – the practice of ‘Air-dropping dogs’ (with cameras fixed to their heads) ‘into enemy territory’.

But this awareness of separate self is the wound of our modern consciousness … Her gate is hinged here. Pen poised, hand resting on the empty page she waits:

At the narrowest crossing point where nib meets paper she translates her self to the fields as the alchemist, Thomas Vaughan instructed.’

(Paul Matthews, from his review of The Green Gate in Tears in the Fence, Issue 63.)

“The natural world, the numinous, the brevity of life, the mystery of dying and the solace of poetry all find expression in this exquisitely observed and carefully constructed collection.  Fiona Owen’s distinctive voice invites us into a world where words really do come as angels, carrying messages from flowers, grasses, birds and animals and challenging us to honour this complicated world where wounds can be worn as kinds of jewels.” (Victoria Field)

“Fiona Owen is a passionate poet. Her muse in several poems is the blackbird, an actual blackbird, whose lyrical song flows from his black throat. As it is a song that seems to improvise, with constant musical variations, so many of Fiona Owen’s poems seem to play upon immediate notations. But this is an art achieved by much practice, to the point where it becomes second nature. It is an art that works to catch life as it happens.” (Jeremy Hooker)

“… these poems are like watercolours … also full of sound, gentle rustling, a spirit moving through. … Things glimpsed almost out of the corner of an eye.” (Seán Street)

Written over the course of one year (2009-2010), these poems are a collaboration with poet Meredith Andrea.

g between inward and outward, between human spirit and nature, and between the two poets, with their different circumstances and complementary gifts, make this a truly remarkable poetic collaboration’ – Jeremy Hooker. (Jeremy’s full review of the book is on the Cinnamon Press website.)

‘Their poems offer modes of attentiveness to nature that allow the “mundane” to embody more than material processes’ – Anne Cluysenaar (back cover). Anne also wrote the preface to the book.

The beautiful cover is by painter Ann Johnson 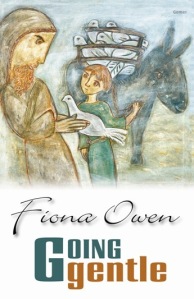 It is in the ordinary twists and turns of everyday relationships that Fiona Owen discovers the wonders and horrors of existence. It is in the impermanence of today’s moment that she experiences the centuries behind and beyond us. And it is through her own autobiography that she identifies with the lives of others in a celebration of those shared communities that we must, of necessity, build if we are to survive. In its simple but sincere search for what is truly important, Going Gentle is a thoughtful and thought-provoking collection of contemporary, intimate and accessible poems.

‘This poet sees the connection between all living things and the world at large … Such imagery emphasises effectively the nature of compassion that is itself born from simple things such as “the sight of a wren/on a fennel stalk”‘ – Gillian Drake, Roundyhouse

‘Fiona’s collection is wide-ranging. It takes in global political and environmental concerns as well as much autobiographical material and several elegies … there is an elegant simplicity which somehow reminds me of rain in green fields … This way of being with the whole planet, I feel, is the beginning of a profound healing process.  Poetry, with its tentativeness, questioning and ambiguity, is the perfect medium for exploring deep ecology, that is, how we can best be at home on the earth. … Poets like her who are heart-wrought for trees, and prepared to say so, are the most necessary’ – Victoria Field, Lapidus Journal

In their journey from the sandy imagery of the Arabian Gulf to the green of Wales, the poems in Imagining the Full Hundred explore and affirm precious, precarious life, characterised by its transience and mystery, and place the theme of extended kinship at the heart of the book.

‘About the most refreshing thing I’ve come across in Welsh poetry in an age’ – Peter Finch, Planet

‘This is a funny, tender, richly enjoyable first collection of poems, infused with a mischievous wit that shines through its sincerity of engagement … Closing the book, the reader has the sense of having been a guest made welcome at the hearth of a warm, full and attentive life’ – Elin ap Hywel, a review from http://www.gwales.com, with the permission of the Welsh Books Council